Kanye West stopped by NY’s 105.1 radio station and chatted with The Breakfast Club about Monday’s interview with Amber Rose. Kanye was not too nice about the woman he dated for a few years, publicly slamming her on the radio and said he doesn’t feel like he has to lash out at Amber for dissing Kim (and the fam). “She’s just soaking in the moment. Nobody feel compelled to do nothing. If Kim had dated me when I first wanted to be with her, there wouldn’t be an Amber Rose, you know what I’m saying.” And they’d be no Kim K. without the sex tape…umm hmm!

Kanye also said Kim did not send him naked photos during his relationship with Amber and that he had to take a lot of showers when he first started dating Kim…to rid himself of Amber (yeah like Kim didn’t have a past right?  Ray J, Nick Cannon, Reggie Bush, Kris Humphries and that’s the people we know of) “I wish. Gladly, happily I would have liked to [have received nude photos from Kim]. By the way, it’s very hard for a woman to wanna be with someone that’s with Amber Rose. I had to take 30 showers before I got with Kim.”

Kanye also kinda confirmed Tyga’s relationship  (which Tyga denied) with Kylie telling the morning show, “I think he got in early, I think he was smart. They are closer in age than a lot of relationships that I know. I knew Tyga was smart. Yeah, I can’t speak on nobody’s relationship.”

She just 17 and they act like she’s a piece of prime beef! 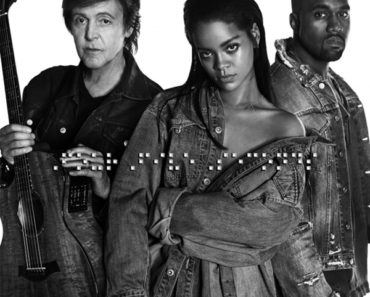