Katy Perry’s new video, “E.T.” looks like its going to be amazing, or at least I think so, plus the song alone is great! But Katy had a few problems with the extensive makeup application that took hours!

She sat down with MTV,

“It was, like, five and six hours, each makeup look,” Perry said, admitting that it was a challenge for her to remain patient during the process.

“It was hard for me! It was really a patience thing for me on this video,” she said. “But, you know, it’s like when you’re doing a film. Sometimes you have to do prosthetics, and you have to get really old or turn into an animal or a monster â€” and that’s kind of what this process was.”

And after the five- to six-hour application process, how long did it take Perry to get out of her getup? “Like, 10 minutes,” she said, laughing.

The “E.T.” video will premiere online today at noon on MTV.com, VH1.com and LogoTV.com. Then, “MTV First: Katy Perry’s ‘E.T.’ ” will bow on air at 7:53 p.m. ET before tossing to an MTV.com live stream, featuring MTV News correspondent Sway’s exclusive chat with Perry, an interview with director Floria Sigismondi and reaction from Perry’s fans. 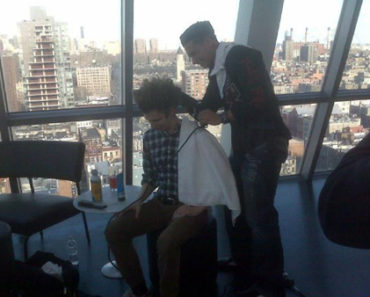