Khloe K is clearing up a rumor that she was upset and stormed off when Lamar gave attention to some other ladies after a basketball game in NYC…she says that did not happen!

Despite what some reports would have you believe, Khloe Kardashian says she and basketball-star hubby Lamar Odom aren’t on the rocks — or even close. In fact, Khloe tells Celebuzz exclusively that a RadarOnline.com story claiming she “stormed out” on Lamar in a “jealous rage” because he was flirting with women at a New York club is flat-out untrue.

“Sorry to disappoint everyone, but Lamar and I aren’t big fighters,” Khloe told Celebuzz. “Come to think of it, that was actually a really fun night out with all of our closest friends…lots of dancing, drinks and our usual silliness.”

Khloe is too busy to sort through the rumor mill, anyway: She and Lamar are headed to Spain today, where he will train with his Team USA teammates. We’re guessing she’s bringing her baby blanket.

“Stories like these don’t really bother me too much anymore,” Khloe told us. 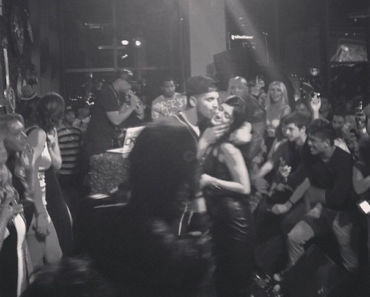