Lady Gaga maybe one of the most famous ladies in theÂ worldÂ right now, but she suffers ofÂ lonelinessÂ even while in a relationship…she is afraid of sex and the day she hit rock bottom! Lady Gaga also said that she uses cocaine occasionally like a few times a Â year ( that’s not in the interview excerpt below). I think that Gaga just gave TMI…she should never talked about her current drug usage…I thought Gaga was beyond this!

Lady Gaga tells Vanity Fair contributing editor Lisa Robinson that she tries to avoid having sex because she is afraid of depleting her creative energyâ€”â€œI have this weird thing that if I sleep with someone theyâ€™re going to take my creativity from me through my vagina.â€

She also says that she doesnâ€™t trust anybody and doesnâ€™t know if she ever will. Gaga tells Robinson, â€œIâ€™m perpetually lonely. Iâ€™m lonely when Iâ€™m in relationships. Itâ€™s my condition as an artist.â€ Regarding men, she says, â€œIâ€™m drawn to bad romances. And my song [â€œBad Romanceâ€] is about whether I go after those [sort of relationships] or if they find me. Iâ€™m quite celibate now; I donâ€™t really get time to meet anyone.â€

Gaga talks candidly about her drug use and recalls her ultimate low point: â€œI was completely mental and had just been through so much.â€ She had been using drugs, and is quick to tell Robinson that, if she writes about that incident, â€œI do not want my fans to ever emulate that or be that way. I donâ€™t want my fans to think they have to be that way to be great. Itâ€™s in the past. It was a low point, and it led to disaster.â€

Instead of rehab, though, when disaster struck, Gaga â€œwent home.â€ She tells Robinson, â€œAll I will say is I hit rock bottom, and it was enough to send a person over the edge. My mother knew the truth about that day, and she screamed so loud on the other end of the phone, Iâ€™ll never forget it. And she said, â€˜Iâ€™m coming to get you.â€™â€ Gaga says they went to her 82-year-old grandmotherâ€™s house in West Virginia. â€œI cried. I told her I thought my life was over and I have no hope and Iâ€™ve worked so hard, and I knew I was good. What would I do now? And she said, â€˜Iâ€™m gonna let you cry for a few more hours. And then after those few hours are up, youâ€™re gonna stop crying, youâ€™re gonna pick yourself up, youâ€™re gonna go back to New York, and youâ€™re gonna kick some ass.â€™â€

Gaga also responds to the brouhaha surrounding her appearance at the Yankees game, and what she wore to her sisterâ€™s graduation; shows Robinson the contents of her bag; explains her devotion to her Little Monsters; and more.

The September issue of Vanity Fair will be available on newsstands in New York and L.A. on Wednesday, August 4, and nationally and on the iPad on Tuesday, August 10. 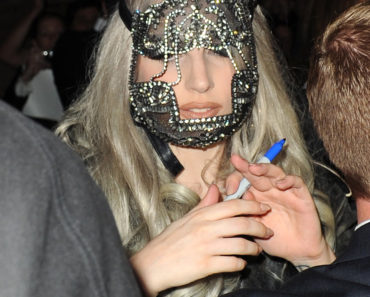