Charlie Hunnam is about to start his promo work for King Arthur and first up his shirtless and sexy set of photos for VMAN Magazine. And he’s still talking about quitting, Fifty Shades of Grey. “Oh it was the worst professional experience of my life. It was the most emotionally destructive and difficult thing that I’ve ever had to deal with professionally. It was heartbreaking.”

He then discussed breaking the news to director, Sam Taylor-Johnson.“I called her and we both cried our eyes out on the phone for 20 minutes. I needed to tell her that this was not going to work. I was going to finish Sons, shoot the whole sequence where Tara was brutally murdered, fly to Vancouver the next day, have ten days of rehearsal, and then start shooting. Then I was going to have three days after that and I’d have to start shooting Crimson Peak and then I’d have two days to travel and go back into season seven of Sons. There was a lot of personal stuff going on in my life that left me on real emotional shaky ground and mentally weak. I just got myself so fucking overwhelmed and I was sort of having panic attacks about the whole thing. I just didn’t know what to do.”

And just an FYI the nudity was fine with him. “The outside perception of that was that I got really cold feet and got scared of the explicit nature of the sexuality of the piece. When I was 18 I was getting f*cked in the ass, completely naked on national TV, y’know?” 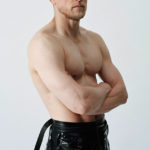 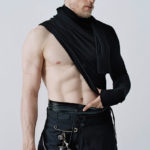 He really should stop apologizing. It’s old and sooo over. More people ask him about Fifty Shades than Sons of Anarchy…what gives. People drop out of movie all the time and don’s make this big a deal of it!