Susan Sarandon is finally opening up about the demise of her relationship with Tim Robbins and even she was shocked at her breakup. After 20 something years it does seem crazy to start new relationship, but if you really don’t want to be together anymore…what’s the point?

“People were coming up to me in the street and saying, ‘I cried and cried when I heard,’ ” the actress tells Britain’s Telegraph. “Well, I was sadder! I didn’t think it would ever happen, either.”

Sarandon says the love affair, which began in 1987 on the set of Bull Durham, had just run its course. “You bring people into your life at certain times,” she says. “Maybe you have a relationship to have children, and you realize that it’s fulfilled after that point.”

Sarandon, 63, and Robbins, 51, have two grown sons â€“ Jack, 21, and Miles, 18 â€“ but they never married. “I’ve always liked the idea of choosing to be with somebody,” Sarandon says. “I thought that if you didn’t get married, you wouldn’t take each other for granted as easily. I don’t know if after twentysomething years that was still true.”

But she’s tight-lipped on whether she’s choosing to be with anyone now, including Jonathan Bricklin, 31, her business partner in SPiN New York, the NYC ping-pong bar. “You have to have a sense of humor,” she says of reports linking the two. “There are lots of people in my life at the moment.”

Sarandon, who’s currently starring in Wall Street: Money Never Sleeps, describes herself as a “serial monogamist” and “a bit of a hippie chick,” and says she’s learned a few things along the way about the dangers of getting complacent â€“ in work or in life.

“Your relationship with people or with your job has to be a growing organism,” she says. “It’s not something where you reach a certain point and then you start preserving it. You have to nurture it, you have to stay curious and hungry and foolish. Once you stop doing that, you get satisfied, and you get stuck.” 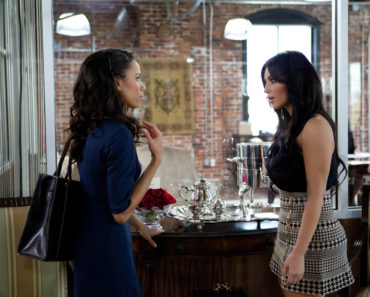