Taylor Momsen dissed her parents a few months back saying that she was unhappy because she started working as a 2 year old and she blamed her parents for that (probably true but she could have stopped acting by now if she wanted to). She must have realized how she looked and has apologized to her parents. Good!

In the issue, where she appeared wearing little more than garters and lingerie while sporting a gun, she said, “Everyone’s like, ‘Wow, why is she upset, and why is she so miserable about things?’ My parents signed me up with Ford [Modeling] at the age of 2. No 2-year-old wants to be working, but I had no choice. My whole life, I was in and out of school. I didn’t have friends. I was working constantly and I didn’t have a real life.”

Now, in a new sit-down with Kerrang magazine, Momsen is apologizing to her parents for the comments, and sort of backtracking on her previous statement.

“[After reading the article, they felt] horrible! I love my mom and dad. Maybe I didn’t have the childhood people think you should have, but I still went through the ages,” she says. “I was still a child. Maybe it wasn’t a conventional one, but you know … I like where I am now so it’s OK. I think my parents have learned by this point that none of [what they read] is probably true, and words can be put in your mouth.” 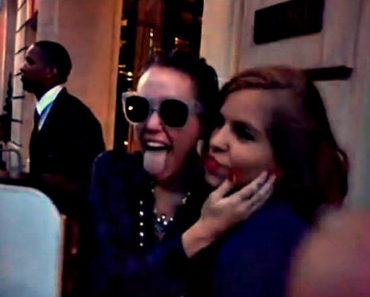