NIcki Minaj and Nas sparked dating rumors when they posted a photo together on Instagram, but since since then the courtship has gotten more seriios, although Nicki swears she’s currently celibate. Nicki stopped by Ellen and dished on her possible new guy Nas, a fellow Queens rap legend! “He’s so dope…he’s such a king. Shout out to Queens, New York, we’re both from Queens. He’s the king of Queens, and I’d like to think I’m the queen of Queens. He’s a rap legend, and I have a lot of respect for that. And he’s kinda cute too.”

Have you had sleepovers yet?” DeGeneres asked the ‘No Frauds’ rapper.
“We have! Yup. I go to (his house)…I just thought him coming to me was too forward. Let me clarify, we didn’t do the…” “The nasty?” Ellen questioned.

“No, because I’m just chilling right now, I’m celibate. I wanted to go a year without dating any men, I hate men. But I might make an exception to the rule for him.” Minaj says Nas told her to say hello to Ellen. “(But) he definitely doesn’t know I’m really going to talk to you about it.”

Wow Nicki thats a lot of TMI! Do you like a NIcki-Nas relationship? 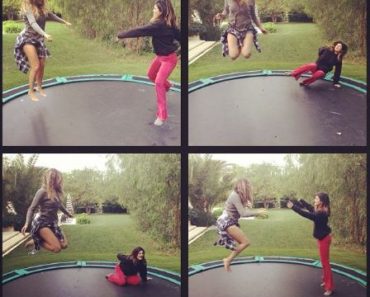